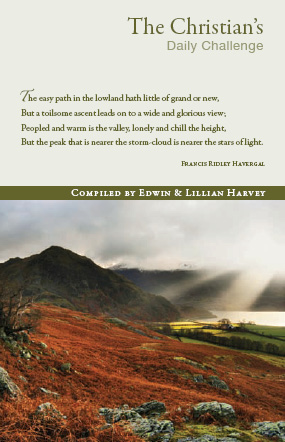 As soon as a man begins to enlarge his life his resistances are multiplied. Let a man tear out of his soul the petty selfish purpose and enthrone a world-purpose, the Christ-purpose, and his suffering will be increased on every side. Every addition to spiritual ambition widens the exposure of the soul, and sharpens its perception of the world’s infirmity and the sense of its own restraints.
—J. H. Jowett.

Wesley said, “The Lord increases His work in proportion to the opposition it meets with.”

If you meet opposition, it may indicate that you are doing something that counts. In digging wells, Isaac had no opposition from the Philistines until he struck water.

Did I ever feel so? Yes, I think just as bad as any mortal could feel—empty, inside and out, as though I had nothing, human or divine, to aid me, as if all hell were let loose upon me! But I have generally felt the worst before the best results, which proves it was Satanic opposition. And it has been the same with many of God’s honored instruments.
It stands to sense, if there is a devil, that he should desperately withstand those whom he sees are going to be used of God. Supposing you were the devil, and had set your heart on circumventing God, how would you do it but by opposing those who were bent on building up His kingdom? He tries the wilderness experience on every true son of the Father, depend on it. He hopes to drive us from the field by blood and fire and vapor and smoke. But our Captain fought and won the battle for us, and we have only to hold on long enough and victory is sure.
—Catherine Booth.